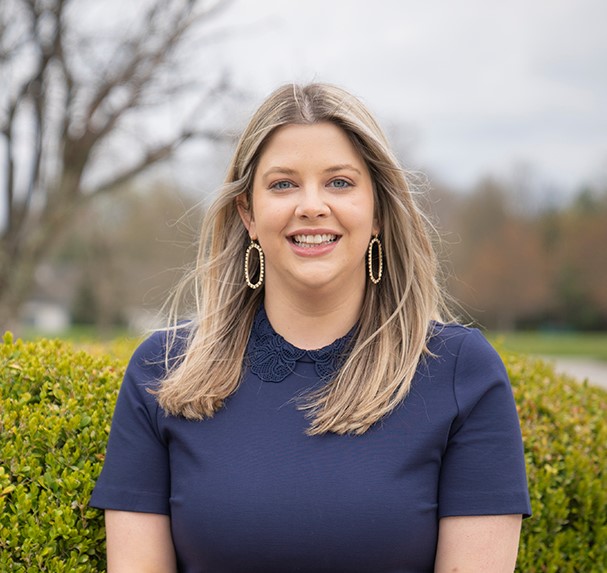 Meet alum Kelsey Carter: Research Program Manager at the University of Kentucky’s College of Public Health (CPH), and first-generation graduate from the first Bachelor of Public Health (BPH) cohort in 2016 at CPH.

Originally from Scottsville, Kentucky, the birthplace of what would become the Dollar General store chain, Kelsey always somehow knew that she was going to the University of Kentucky.

“Going to college, and at the University of Kentucky, was a chance to expand my horizons,” says Kelsey. “I wanted to get there by any means possible.”

For first-generation students, those means can (and do) present challenges, such as funding and getting properly prepared for a new journey in higher education.

“One of my first challenges as a college student was that I didn’t expect things to move so fast,” says Kelsey. “There is also this pressure of failing and then wondering how I would pay for my education, or would I have to come home?”

Kelsey had great influencers who were always encouraging her to go to college, keep her grades up, and apply for scholarships (like the GSP). To Kelsey, there was never a question if she should go to college.

“My parents always wanted something better for me,” she says. “I also received lots of support from youth group leaders in high school, math teacher, and grandparents.”

Kelsey always recalls how confusing it was keeping up with the paperwork and other important financial and academic deadlines while enrolled in college as a first-generation student.

“The good thing is that there are so many resources at the University of Kentucky,” she says. “It can be at first overwhelming because I was used to just figuring things out on my own and not needing to ask for help. I was happy to be on campus and to be part of student organizations where I felt appreciated and accepted.”

Kelsey believed that because she was first-generation and where she was from in Kentucky, that she brought a unique perspective to the classroom. This perspective, and her passion for helping others, led her to public health, and eventually changing her career goal of becoming an eye surgeon to the field of public health.

“In my public health classes, I could relate to the content in class because I’ve actually seen it in my hometown community,” she says. “I was able to bring that unique perspective to the table when it came to public health topics like populations having access to resources and overcoming transportation barriers in a rural setting.”

Regarding advice to first-generation college students, Kelsey recommends exploring, talking to your professors, putting in the effort, and most importantly, following your passion.

“Following my passion led me to public health,” she says. “I remember the day that they announced starting a Bachelor of Public Health program in one of my classes. When they started talking about the possible careers in public health, I knew this was the right path for me and I started exploring other courses in public health.”

“I remember sitting in the front row of her class, which I loved,” says Kelsey. “I was beginning to explore internships in my Junior year, so I decided to speak to Dr. Bush after class. She offered to write a recommendation letter and helped me get plugged in. I would strongly encourage students to speak to your faculty but also put in the effort to learn.”

Kelsey understands that asking for help for first-generation can be difficult.

“Asking for help is hard,” she says. “In college, sometimes there might be times where no one is there to hold your hand, but you should be proactive and ask for help. I knew that my scholarship was important to me to continue being a student, so I decided to let my wall down of doing things on my own and ask for help.”

For first-generation, and many other students, Kelsey understands that homesickness can happen.

“You must build a support system,” she says. “Get plugged in to organizations on campus because you will need emotional support. Get to know people and build yourself a peer network.”

BBNvolved and The Study are two places at the University of Kentucky that Kelsey highly recommends learning about student organizations and where you can get academic support.

The University of Kentucky has a dedicated team, services, and programming for our first-generation population, which can be found at uky.edu/firstgeneration.